Less than five years ago Dagenham Farm was a site of concrete and glass, designed to produce municipal plants for the borough. Today it is a highly productive centre of salad and vegetable growing using sustainable and soil enriching practices throughout. The site is leased by Growing Communities, a not-for-profit organisation based in Hackney.

Growing Communities started out in 1996 by setting up a veg box scheme to provide a practical, viable and sustainable alternative to the damaging, supermarket-led food system. It wanted to enhance awareness and understanding of the need for a sustainable and resilient food system to meet the challenges posed by climate change and resource depletion and to prove that such a system could work and thrive.

A number of key principles were articulated such as food farmed and produced ‘ecologically’, food sourced locally, seasonally and directly, food production which is both economically viable and independent of corporate interests, and food production which fosters community. With these principles enshrined in Growing Communities, the result is a project which is a resounding demonstration of how community-led trading projects can create real change.

Not only was interest generated in local food, but that interest was at a level which enabled Growing Communities to set up new growing activities within Hackney. The Growing Communities office now not only manages a weekly fruit and veg bag scheme with almost 1000 members alongside a weekly, highly successful Farmers’ Market – both of which are sourced from its own farms or local organic and sustainable growers – but also directly oversees salad and vegetable production from its own Patchwork Farm across Hackney and its newer Dagenham Farm.

Growing Communities took over the Dagenham site in 2012 when it was closed as a plant production centre by Dagenham Council. Costing a fortune to demolish, even though worth a fortune no doubt for housing development, the council took the innovative route of offering the site on long-term lease to the enterprising people of Hackney! It now produces about five tonnes of veg every year. In the spring, there are significant quantities of leeks, spring greens, spinach and other greens. Then in summer and autumn, salad and tomatoes, as well as chillies, cucumbers, squashes, beans, aubergines, courgettes, strawberries and melons.

In order to achieve this output the basic structure of the site – glass hothouses set up on plinths of concrete – had to be transformed with concrete being taken up and replaced by compost and heating pipes removed. Crops now take advantage of the season extension offered by the solar gain in the greenhouses, a sustainable method of growing, using no fossil fuels. This conversation and the subsequent development of productive growing schemes have all been overseen by head grower Alice Holden, a farmer of amazing tenacity!

The farm not only aims to produce organic food close to where people actually live, but it also aims to help local residents to gain skills in food growing, preparation and selling. In January 2016 it became the home of Grown in Dagenham, a project training local residents in food-growing and preparation skills and helping young people to learn about where their food comes from. A key part of the project from the outset was the monitoring and evaluation of the work in order to track the impact on local young people and residents against the overall aim to increase physical and mental well-being. In 2014 the farm was also part of the Grow Wild project, helping children learn about growing and biodiversity by visiting the farm and planting native flowers.

Dagenham Farm, along with its partner Patchwork Farm across Hackney, shows the potential for growing – and selling – significant amounts of produce from farms on the outskirts of cities such as London. Corporatised, globalised, monocultural food production is not a necessity to feed a modern population but a monstrous anathema which is undermining the future. We need to build local production and use of land which is otherwise going to dereliction. Healthy soil and local food underpins a good future. Hackney’s Growing Communities is a wonderfully bright beacon of hope.

The Dagenham project was funded by the Local Food Fund, part of the Big Lottery, from March 2012 to March 2014, when it also became fully certified as organic. The grower’s salary is now financed through sales of produce and she is supported by a team of highly committed volunteers. On the day I was there I met Alice, the grower; Hannah, who now also oversees Food Activities within the Grown in Dagenham project; Ken, water dispenser extraordinaire; Sue, master of fork and hoe, along with Dave, expert packer of Dagenham Salad – the rapidly growing rival brand to Hackney Salad! 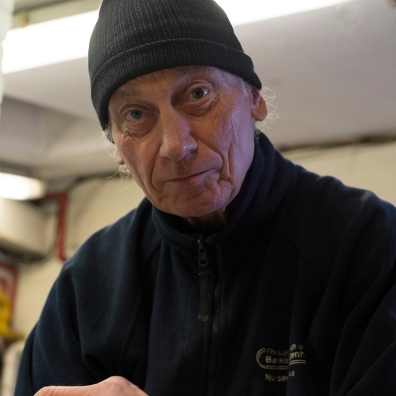 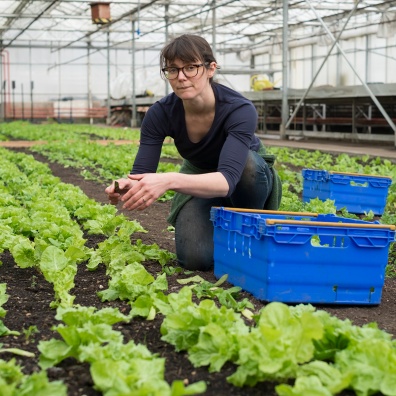